If I'd given it the slightest thought I might have realised plucking a robin at the kitchen table while the mushrooms and garlic were frying gently on the stove could perhaps be difficult to explain should my eldrely neighbour come calling. 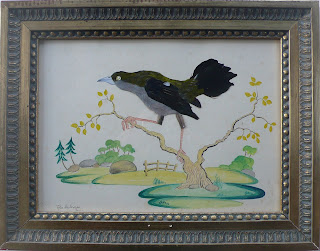 "Sorry to disturb but....... there was an obvious pause while she stood in the doorway trying to make sense of the image before her, while I searched desperately for a responce to the inevitable question. Therese had become used to wandering into my kitchen and finding all manner of things but plucking robins never.

"You won't get much of a feed of that", I could tell I was expected to back with something equally witty.

"Its alright the other two dozen are already in the oven, terrible fiddle but this the last one", I kept a straight face.

"Yes they were doing a spcial offer at Huelgoat Intermarche."

"No of course not" the look of relief was only fleeting "I found it in the greenhouse not a mark on it".

"So why are you plucking it?" a reasonable question in the circumstances.

"And what might feather bird picures be?" I could see where this was going so got up from the table and turned off the gas I would not be eating just yet.

"Oh no don't stop you'reabout to eat" she said puting on a concerned frown still not convinced that I wouldn't still fry the dead robin when her back was turned. Therese new full well that all artists were strange which was a good enough reason to excuse their often odd behaviour.

"Its no trouble and anyway I'd like to show someone, you know just to get a reaction". I'd found Therese a remarkabley astute judge of what the general public would tolerate. Therese followed me through into the front room slopping in her slippers on the slate slab floor and then up the steep open-treat stairs to my studio. Even at 76 she mae light of the stairs they others found difficult to climb, she knew them of old as a young girl then later as mistress of the house.

I opened the yew wood armoire door and took out the leather covered book that had hung around for years on the "could be useful" shelf and opened it to the first page. There it was in all it's glory, a peculiar specimen with impossibly flamboyant tail and massive red crest but a bird none the less.

"Well thats a rum looking bird if ever I saw one", Therese's responce was just as I had expected and I turned to the second page. 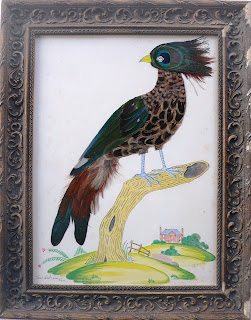 "Ah now thats more like a pheasant isn't it?" True I had used some pheasant feathers in that one but I'd also used mallard wings and a kookaburra tail feathers. I could see Therese was struggling, trying to work out what she was suppose to make of my latest creation. As we moved throught the next four images she began to relax and at last found the fun but also the beauty in what I had been working on. This was definitely not serious art.
Last week I opened the back door to find a jam jar wih a headless bluetit in it, a present from Therese, thught it might be useful.

Posted by Hebridean dreaming at 6:26 AM