Back from Western Australia having spent several weeks doing design work on a 1905 Arts and Crafts house I find the shock of returning from temperatures in the 30's has been lessened with anend of March heat-wave. I have four short weeks of gardening and painting before heading north again to Scotland. I will be taking a few more paintings with me to a Campbeltown gallery with new works of The Mull of Kintyre. 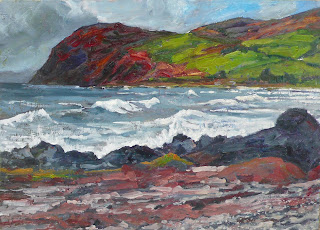 The Mull has since childhood been a magical place for me, being out there at the end of the world and yet Ireland is only 12 miles away. 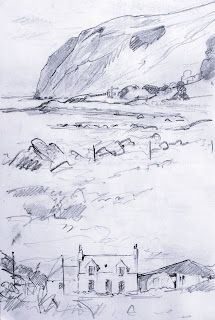 From here it will be onward and upward as far as Lewis where I'll be continuing work on the bunkhouse at Tolsta mixed with some more painting at "une autre bout du monde". 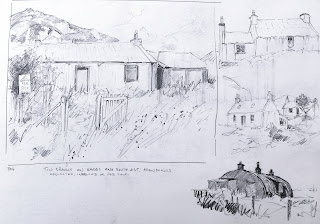 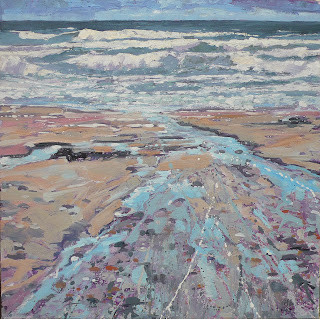 My informative childhood years were spent on Kildalloig Estate outside Campbeltown and were markd by what I now look upon as an idyllic post war period. Days were spent roaming free along Kildalloig foreshore knowing every knot of rocks between the slithering squelchy seaweed, every dip and fold of the horizon far across on Arran and every bend in the branches of my favourite climbing trees was as if everything that surrounded me was simply an extension of my own body: From the hills that climbed steeply up behind the old walled garden through the thick bluebell beech woods and beyond across a fragrant land, where the hill-sheep grazed tight the meagre grass. Higher still where soft low cloud often covered the very top of Ben Ghuilean, there where the brilliant yellow scented gorse gives way to the random patchwork of purple heather and fresh green bracken. 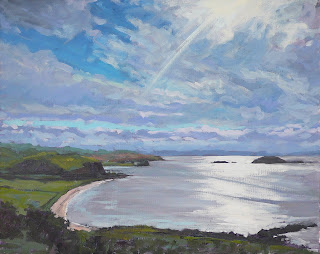 All this was mine to roam over, the flat fertile fields running along the coast road where we tilled the soil, tedded the grain, singled the swedes and raked the green appearing ground. The constant soaring cliffs of Davaar Island squatting toad like in heavy swell, a vast plug restricting and sheltering the mouth of Campbeltown harbour. Ours was the crunching pebbled foreshore from out beyond the point, the seaweed bearded rocks that border the coast road from the Dhorlin to the babbling cascades of New Orleans glen and beyond the brooding bulk and wrinkled slopes of Achinhoan Head.
My memories are those stimulated by the vivid visual images that coloured my early years on the Mull of Kintyre and that at the age of four I filled my very first sketch book. In 1961 at the age of eight I left the Mull without explanation or understanding, feet first and flat out in the back of our Vauxhall estate while still recovering from pneumonia. 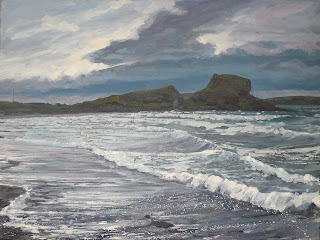 Posted by Hebridean dreaming at 5:35 AM