A better class of junk

A better class of junk. 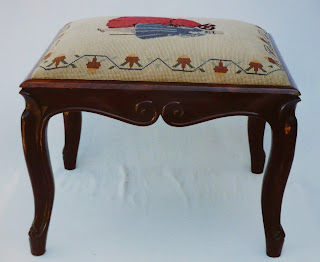 One of the most common complaints I hear these days from my older friends about their offspring is that they don’t want anything from the family home and they really do mean nothing. I understand why this frustrates parents but to me it seems only logical having pampered their children from a tender age and allowed them their own choice in everything from style of hair cut and cloths to the colour of their bedroom walls and the furniture there in, so why now should those children suddenly want their grand parents or parents old cast off’s, throw outs or hand me downs. Friends have often said I’d make a wonderful father well if that means no TV, no pocket money, no Christmas and no choice until they were able to discriminate between recyclable trash and lasting quality then yes I would. When the Jehovah’s witnesses called this week they told me that when God created us he never meant for us to die, to which I replied “what like milk bottles?”  That’s why we are so troubled by death he continued. Personally I thought I’m more troubled by why we smashed all those perfectly good bottles.


We are all a product of our upbringing and should not be surprise if today the younger generation show no interest or attachment to what we see as their heritage. What else could we expect when we allowed them total freedom of choice without instruction from such an early age, so into the consumer boom ourselves that we were only too happy to see them have their own space kitted out with new and apparently cheap white melamine, plywood or compressed wood chipboard? Stripped pine was still permitted but anything dark and heavy was out with no thought to giving the good solid wood a lick of paint we chucked it for an inferior compressed woodchip replacement. I was only too delighted to obtain anything from my grandparent’s home and along with my brother still ponder on what happened to certain items like the elephants foot coal box, the musical toilet roll holder or the magnificently made model hay wagon. It would seem that from the desperation to treat children to the luxuries that the boom years could afford, we only succeed in creating the desperate situation we find ourselves in today. Children learn more at home than they ever do at school and so this consumerist trend is likely to stay, while our children learn nothing of hidden dovetails or mortis and tennon, of scratch stock or granny’s tooth, C scroll carving or marquetry inlay, of cabriole legs and pad feet, of plum pudding mahogany and mulberry.  The antique trade has become a thing of the past that which was environmentally sound and sustainable has been destroyed and we have been seduced into a world of flat pack furniture that will not even make it into the next decade. As our homes become depleted of any sense of history they become soulless simply another safe page from the catalogue. A home can says much about a person and today we seem fearful of our world and of being different. 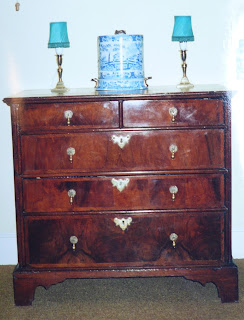 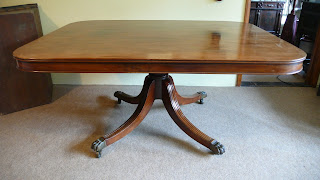 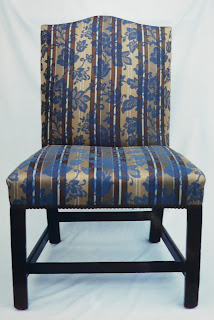 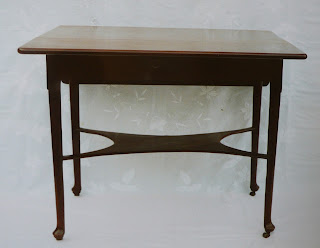 During my childhood I grew up with the furniture, pictures, china and glass that my parents accumulated objects that in the main I was already familiar with from my grandparent’s homes. Then my father started his period of hording all manner of things and the entire rang of farm buildings plus a small Cornish chapel became stuffed full of what he liked to term junk but was in fact antiques.


When I set up my first home it was with what I had collected since the age of thirteen but it wasn’t long before great uncles and aunts started to die off that mementoes of them found a place in my home. Having become an antique dealer my own home soon became hopelessly stuffed and eventually moving proved to be the best way of thinning down and remarkably lucrative with the antique market still very healthy even if in the early 90’s house prices has fallen. Unfortunately it wasn’t long before the accumulation process started to repeat itself but this time across the channel in Brittany where my 17th century farm house acquired a fine collection of Breton furniture plus all that I had shipped over. It became evident that I had inherited the house stuffing gene and that given any space I would eventually fill it. Being a creative person and an artist my home also filled with my own work, mainly paintings but also various items of furniture from a dug out chair to simple spoon boxes as well as shell work creations that sat on side tables and adorned my bedroom walls.


It is never a comfortable experience to look in the mirror and discover someone that resembles your own father looking back but in so many other ways I was becoming my father. Then with his death I realised there were family items and things he had bought that I would like to find space for and so in order to make space I started to give away the odd armoire or old chair to younger friends. So up to this point my home interior had been a product of accumulation of the old rather than purchasing new and as such was described by most people as being like a museum to which I would have to add, “yes but a living one”. Now at the ripe old age of sixty I find myself wanting to scale back and simplify but with no children to say no thank you Dad I find myself in the same boat as so many others, what to do with all this wonderful stuff. Antique dealers have had to change with the times and as one friend remarked about a younger dealer “she’s wonderful dear, learnt her trade well and opened up a shop in the Cotswolds selling the most extra ordinary array of rubbish not an antique in sight”. Auction rooms are still an option for disposal and last month twenty lots of fine English furniture including a large single pillar mahogany dining table, set of Regency dining chairs, a delightful rosewood regency chiffonier, a good cabriole leg stool and a four tier whatnot, three 17th century oak coffers, an early 18th century walnut veneered chest of drawers and a pair of fine Georgian salon chairs, all in perfect order made a grand total of £1300. I insisted that it would be a one way trip with no reserves so have only myself to blame, thankfully back in Brittany I still have the massive open fire that will comfortably handle the disposal of a chair or two at a time and Breton furniture is easier to dismantle than the IKEA equivalent, being real wood it also gives out far better heat with no nasty toxic fumes.


Meanwhile back in England I unpack boxes of china that have not seen the light of day in twenty years and discover that the family silver has miraculously been transformed into worn out silver plate, not even worth recycling. I repack the boxes I send them off to the nearest auction house, no reserves in the hopes that they will make more than the newspaper they are wrapped in. The wonderful treasured and riveted 18th century ceramics today would not be accepted in charity shops as the young hunt for plastic and chrome bargains from the seventies and eighties. I also have joined the throw away society but like to think I chuck a better class of junk.
Posted by Hebridean dreaming at 6:04 AM