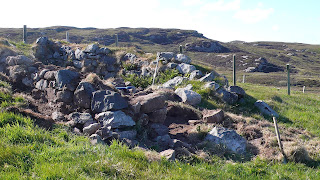 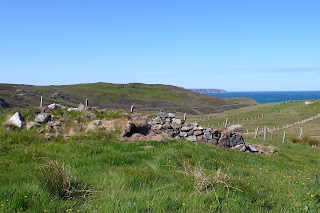 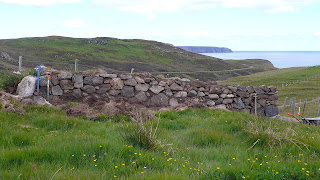 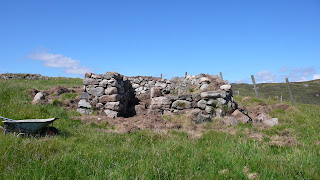 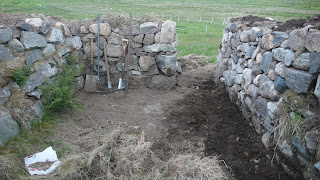 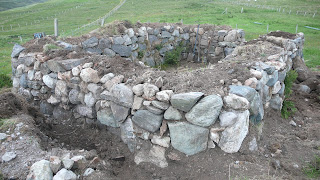 The starlings finally vacated their nest at the back of the house and I was free to start work. For the past four years I've looked at the grassy lump and wondered what structure lay beneath and just what age its origins might be. There are other lumps scattered around New Tolsta all that is left from an age long before the 19th century farm.There would have been serious cerial cultivation as depicted by the mass of lazy beds ribbing the land that runs down to the beach.
The dry weather meant that the usually lush grass was relatively easy to remove and so I started the job of finding the foundation stones and raising the walls. Having worked for years on old houses I'm used to nothing being straight vertical or level. Many of the large granite boulders were beyond my strength to lift and so I rolled, made ramps and pushed the stones up to perch above where I was working and then bring them back down as the wall slowly rose to shoulder height. This would be the limit for this year as I let everything settle and plan the roof which rest on the inner meter thick walls. Tradition would have me turning turf onto the roof to be followed by thatch and all held down with heather platted rope and granite boulders but I remain open to a few modern touches like an old fishing net to hold it all in place.
Posted by Hebridean dreaming at 3:39 AM