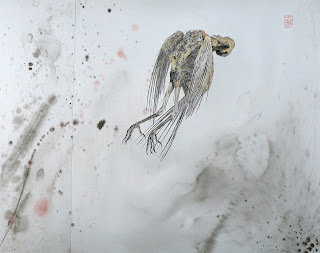 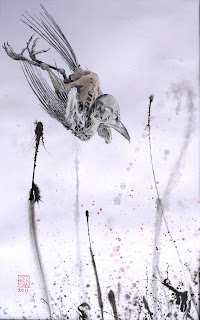 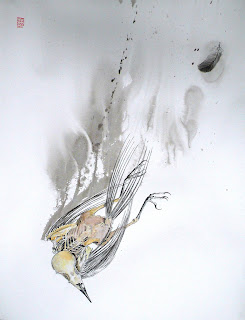 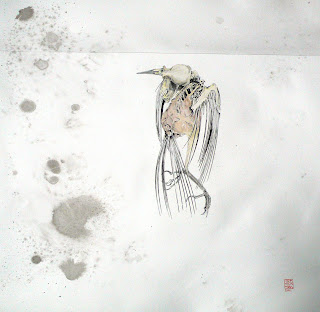 It is now twenty two years since I gave up antique dealing and started to take myself seriously as an artist. Those tentative first steps were taken with much fear but also a certain sense of pride that I had the courage to take the plunge and hold an exhibition of my work. I emptied out the two front rooms of my house in Frome to display paintings and sculpture and was heartened by the support I received. Moving to Brittany meant I was free from any money worries and in Central Finistere I found myself to be one of just a handful of artist. I accepted that isolation would inevitably be part of my working pattern. It was relatively easy to become known and after a few years I opened a gallery alongside my house and studio. A decade on and in the depths of a financial crisis there are very few people locally with any form of disposable income that enables them to even contemplate buying art. Having now had sevral exhibitions where there have been no sales I have been forced to look at my pricing, promotion and subject matter. Reducing my prices is simply not an option since they are in many cases only half of what I charged two decades ago. Promotion via a new website is underway and I will be looking to holding exhibitions further afield, however if I am to continue to show locally I have decided that I must attempt to produce unsalable art so as not to be disappointed with the outcome.


A few years ago a friend brought round a small bag containing a desiccated blackbird she had found in a drawer. Quite how the bird had ended its days stuck there nobody was even prepared to guess. The bird joined my collection of bazar objects and there I had found my unsalable subject for surely no one would wish to hang such an image in their home. Since the images were made specifially to be unsalable it followed that they should either be destroyed or given away after being exibited. So I showed them to a few friends and was somewhat surprised to find they loved them and although none came out with their cheque book. I felt I had as yet not succeeded in my goal to produce unsalable art and the bird, even though well and truly desiccated had taken on a new life finding within the images movement, and once again the dead bird flies.

Interest in death came as a natural consequence of living on a farm where at lambing time birth and death were accepted as an integral part of life. None the less there was a child's fascination that meant when one of the farm cats died our shepherd Neil Tyson would not let my brother and I see just where he had buried it being sure that we would only go and dig it up again. Aged four and five we had not yet learnt about respect of earthly remains and the rotting process but now all these years later I handle bones wth a certain reverence for their structural beauty. I imagine that in a former life I could have been a sun-baked Egyptian archaeologist armed with a soft brush dusting away the sands of time rather than that grave robbing child who would scan the midden for any recent signs of burial.
Posted by Hebridean dreaming at 12:21 AM